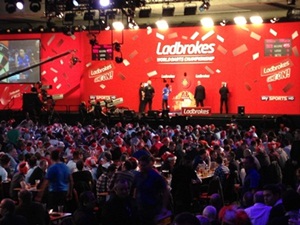 Among several tournaments hosted by PDC, this competition decides the world’s best player of the steel-tip darts.

Each player shared their thoughts after their participation in the worldwide tournament:

■Paul Lim（Singapore）
Unfortunately I lost, although my condition was good in the practice.
I need to adapt myself more to the atmosphere of the big tournament.
You have to outperform yourselves in order to win in the PDC.
For future PDC tournaments, I need to learn, experience more and enhance my performance. In that sense, this competition has been a very good experience for me.

■Haruki Muramatsu（Japan）
Although there was not much difference in the atmosphere of the tournament every year, I get nervous on the stage.
Honestly speaking, I am relieved to be able to win in the preliminary round match as all the Japanese players made it in the past including myself.
I thought I could beat the outstanding player, Simon Whitlock in the 1st round. So it is frustrating as I couldn’t do so. I should have had a stronger determination to compete in the PDC tournament. For this year, I will keep practicing while paying more attentions to the PDC’s top players.

■Lourence Ilagan（Philippines）
I am happy that I made it through the preliminary round although I lost in my first-round match.
I heard that PDC players will compete in THE WORLD 2013. So I will work harder to get the championship title.

■Darin Young（USA）
Obviously, it was not a good result in the end, but I had good moments.
It always feels good to play in this event, as this is the topnotch, great and well-run darts event.