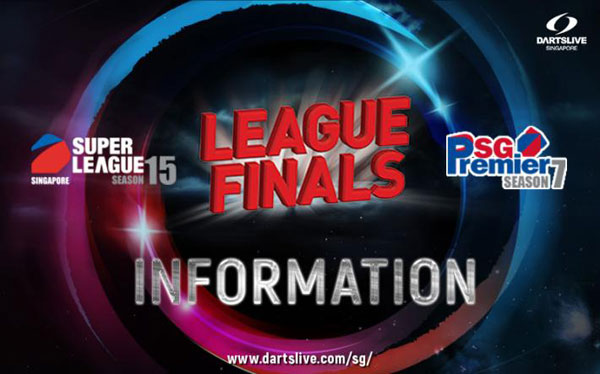 SUPER LEAGUE SEASON 15 and SG PREMIER SEASON 7 is coming to an end very soon!
Do your best and we would like to see you during the finals!
Listed are the timing for all the events happening.
Please take note on the check-in time for your division and don’t be late as walkover rule applies.
All the best to all of you and see you at the top. Good darts!

Plate Finals
・ All 5th to 6th placing in groups will progress to the PLATE FINALS Round Robin playoff.

Division Top Gun
・ Top 3 Ranked players in individual groups will be invited to a special playoff to determine the Division’s TOP GUN.

*Game format for DIVISION TOP GUN will be the same for Round Robin and SKO.