Why Did You Decide to Become a Professional Darts Player? -THE WORLD ONLINE LEAGUE: International Players- 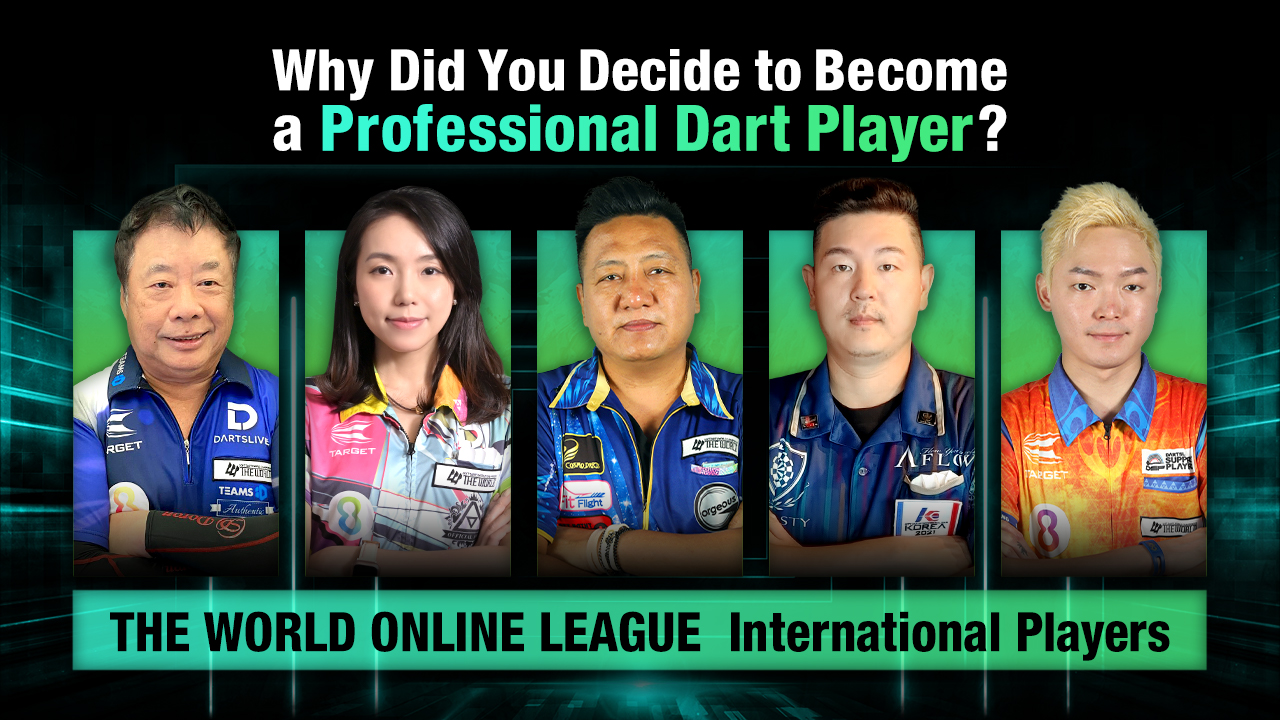 We asked some of the world’s leading international professional dart players competing in THE WORLD ONLINE LEAGUE (live streamed every Thursday until 28 April), “Why did you decide to become a professional player?” They told us many interesting stories. 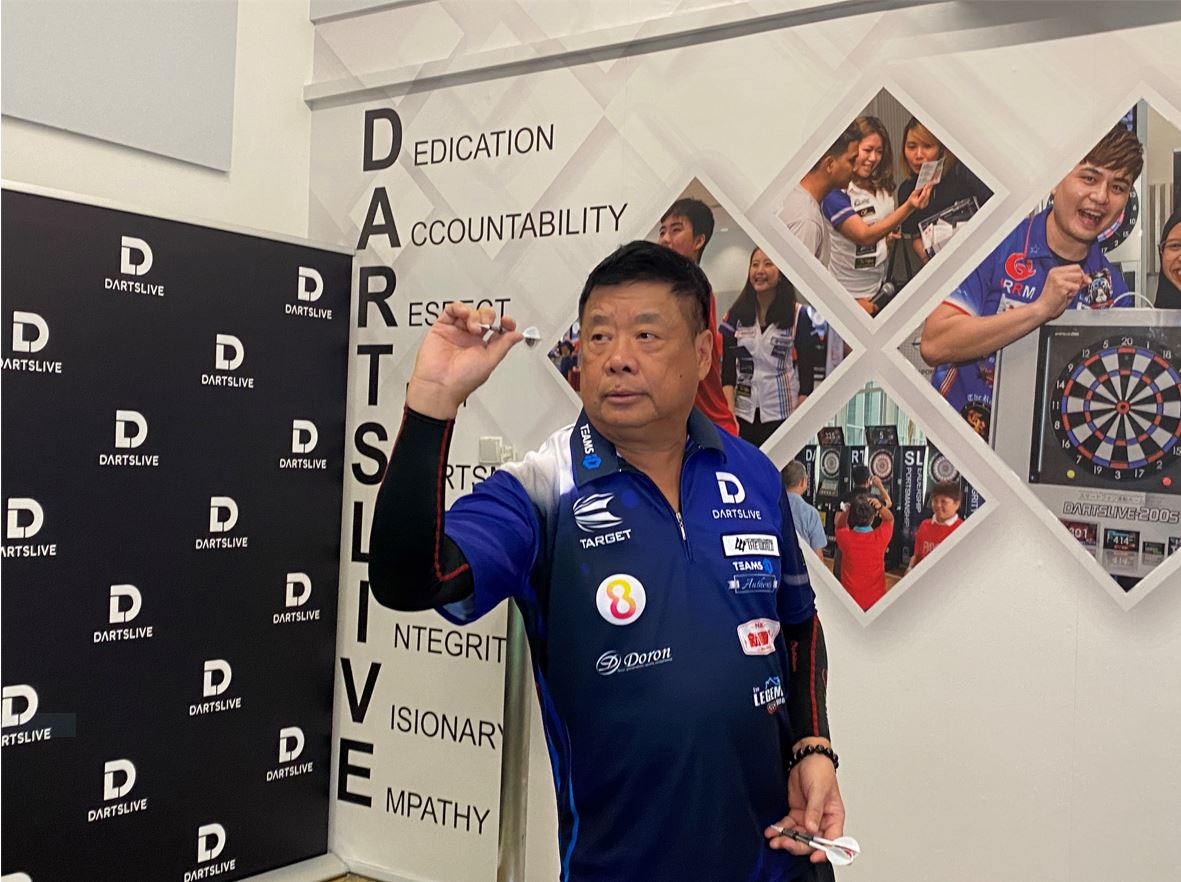 “I liked darts straight away.”

Paul Lim, aka “The Legend,” is competing for Team Singapore. His first encounter with darts was when he was studying to become a chef in London. He started playing steel darts in a pub with his school friends.

Lim then won his first competition and decided to make playing dart his career.

“I actually turned professional in Papua New Guinea when I moved there as a chef. This was after I had represented Papua New Guinea in the Pacific Cup in Australia, where I won the singles title. In 1985, I moved to the United States and became both a chef on weekdays and a semi-professional player on the darts circuit during the weekend.”
Just two years later, Lim became a full-time dart player, playing all over the U.S. and the world. He then went on to become one of the world’s most famous darts legends.

Happier Playing Darts Than Being a Singer 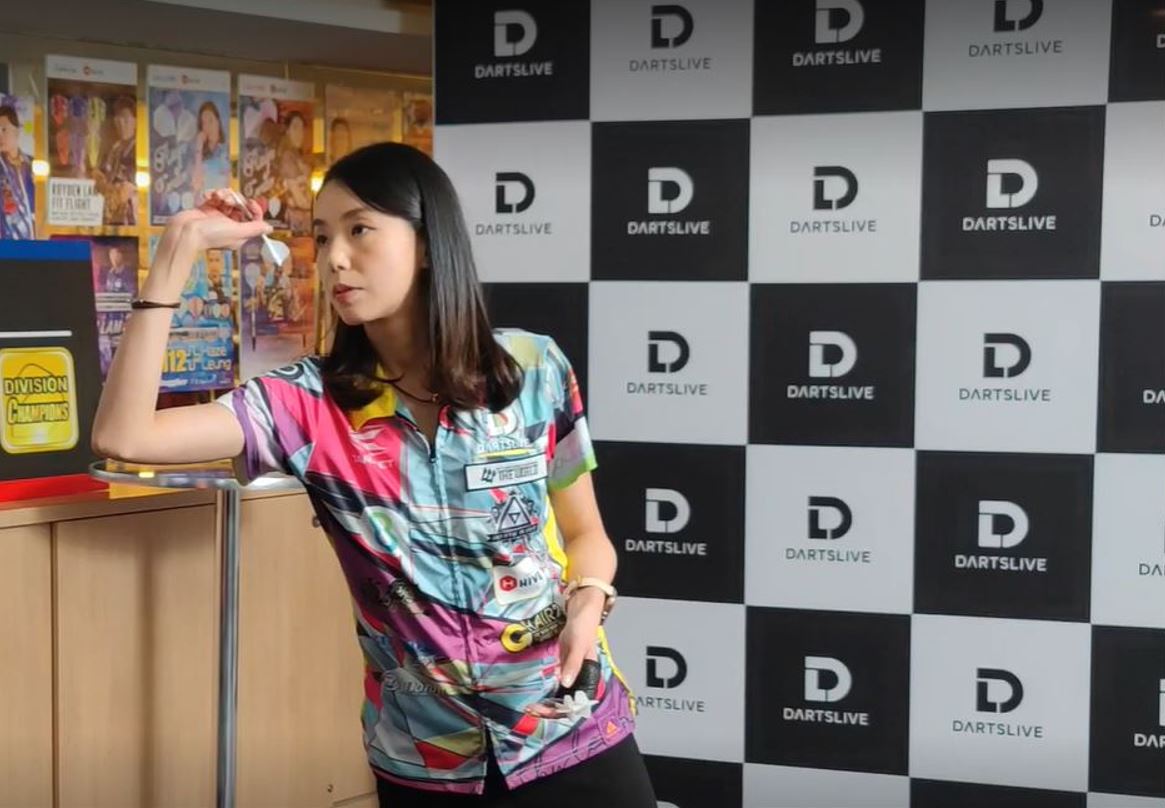 “I see a lot of talent in you. I think you can be a strong player.”

These were the words that made Cathy Leung feel passionate about playing darts.

Leung is a very popular female dart player worldwide and she competes as a member of Team Hong Kong. It was the legend Paul Lim, who discovered her as a dart player.

The opening words were said by Lim to Leung, who had just started playing darts.

“I see a lot of talent in you. I think you can be a strong player.”
She became even more interested with darts after hearing this.

Her first encounter with darts was at the youth center of the church she was attending at the time. They had an old model darts machine that she used to play dart for the first time.

“I thought it was a shame that the machine wasn’t being played by anyone, so I bought my own set of darts that day. The first night I played, I fell in love with dart because I was mesmerized by the feeling of a dart hitting the spot I was aiming for! I still remember how happy I was the first time I hit the BULL!”

Leung had already been active in the entertainment industry as a singer, but after achieving her dream of representing the Hong Kong team and winning in the SOFT DARTS WORLD CUP, she wanted to further her career in darts.

“I asked myself which I would regret quitting more; singing or dart. It was very difficult, but I realized that I liked darts more.”
With this in mind, she retired from singing and became a full-time darts player. And she is still one of the most popular players in Hong Kong. 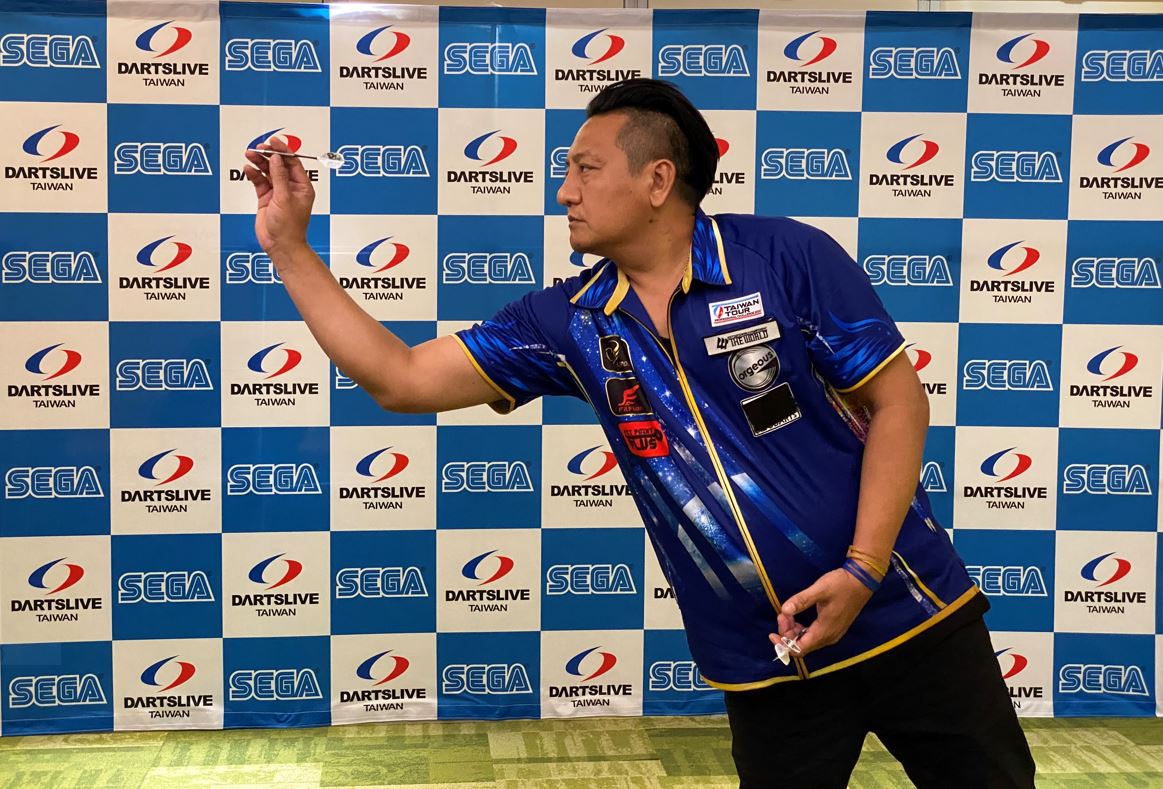 Pupo Teng Lieh has shown his overwhelming strength as a darts player in Taiwan. He will be competing in THE WORLD ONLINE LEAGUE as a member of Team Taiwan.

You could see a glimpse of his talent as early as the day he first played darts.

Born in Tibet and raised in India, he moved to Taiwan when he was 17. Before taking up darts seriously, he was a Tibetan restaurant owner in Taichung.

“I love to compete, especially on the international stage of THE WORLD,” says Pupo. He has become so good that he was ranked 4th in the 2019 annual ranking for THE WORLD, the tournament he says he loves the most.

Pupo has been playing darts for only 3 years and has grown rapidly to become a SUPER DARTS competitor. His momentum is remarkable. 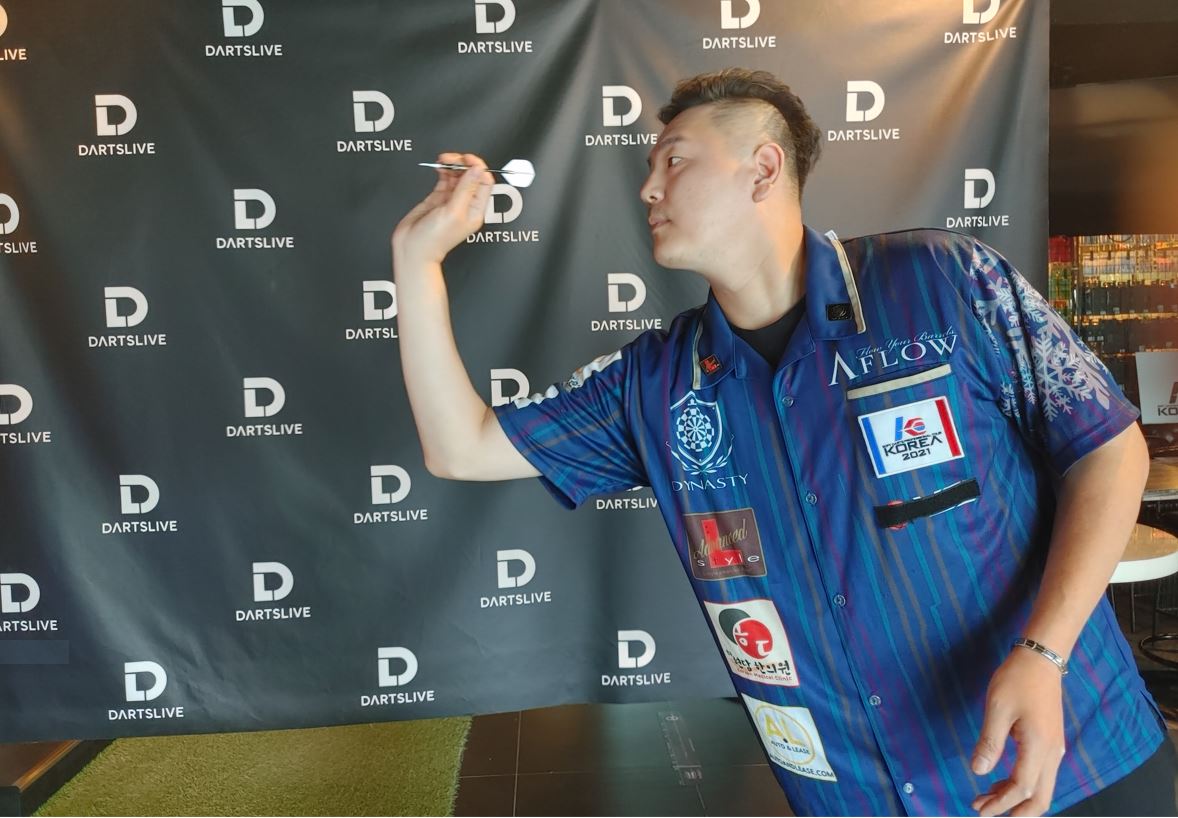 Team Korea is a pairing of Korea’s two strongest players.
One half of the pair is Woong Hee Han. His first encounter with dart was when he was a university student, working part-time in a bar.
“My boss at my part-time job told me to start throwing darts. Just one week later, I was asked to take part in a tournament. I was in a bit of trouble at the time…”

However, it was at this tournament that he discovered the joy of darts and started to play darts seriously.

“A week after I threw my first darts, I was competing in a tournament. It was amazing how fast this was happening.  On the stage of my first competition, I was very nervous and could not throw well. Afterwards I thought, ‘If I work a bit harder, I could be more accurate with my throws.’ I was practicing, thinking ‘I’m almost there, I’m almost there…’ and that’s how I got hooked on dart.”

“When I first became a professional player, I felt that everyone around me was so good that I would never be able to keep up with them.”
Even so, Woong Hee Han is a competitive player, and as a result of his continued efforts and confidence in his ability, he has grown to become an experienced leader in the Korean dart world.

Making a Career out of Darts 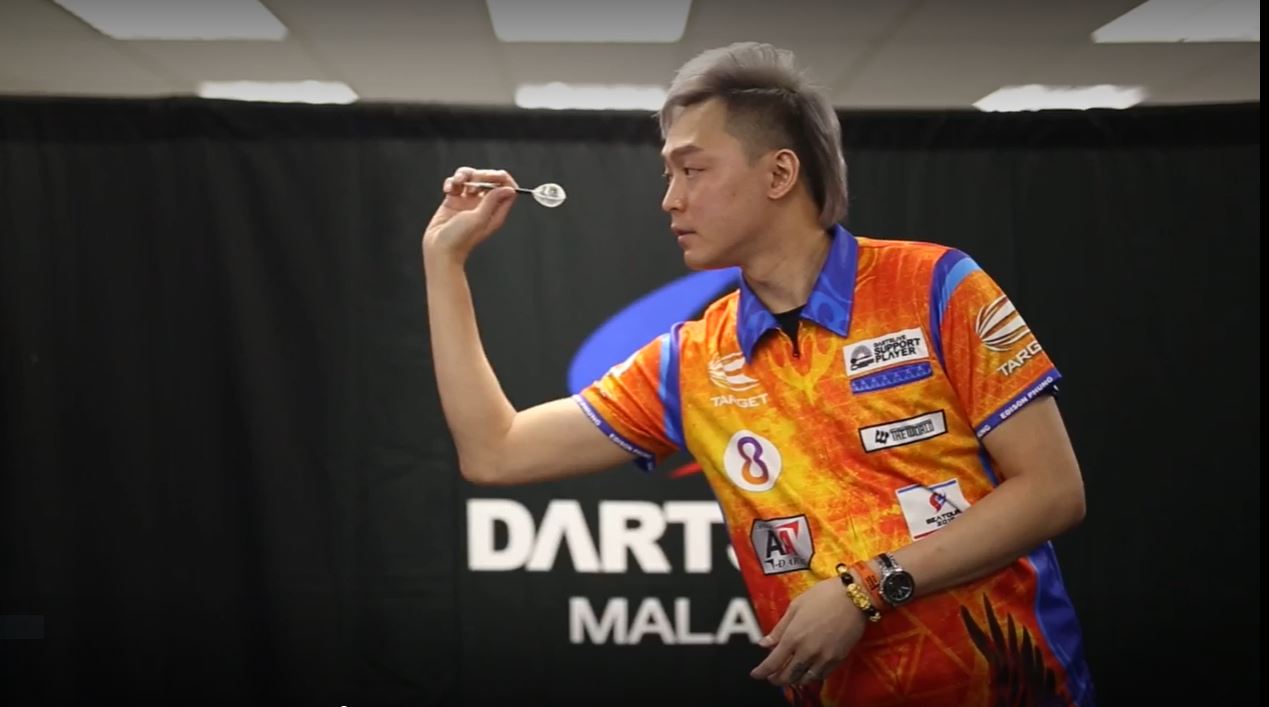 Edison Phung, who is expected to perform well for Team Malaysia, started playing darts when he went to a friend’s party.

“At a friend’s party, I was suddenly given a dart to throw. Then the first time I threw a dart, I hit the BULL! There is something special about the joy of hitting the BULL. I thought it was great to have a sense of accomplishment while having fun. I still feel elated every time I throw darts, and I love the feeling I get when I do.”

It was a match at the DARTSLIVE OPEN MALAYSIA in 2017 that brought Edison Phung to attention and inspired him to pursue a professional career.

“I was paired with the legend Paul Lim for a project called ‘Dream Match.’ I’ve always respected Paul, but after playing with him, I was blown away by his stamina and his spirit for dart, as he was able to play consistently for a long time, almost perfectly every time. When I played that game, I knew that I wanted to be a professional dart player someday, and my dream came true!”

He believes that playing darts is what makes him happy.

“Some people say that what you love should be a hobby, not a profession. But I didn’t see myself that way. I really love playing darts and I thought that it should be my life!”
Edison Phung is currently a professional dart player and hair salon owner. He is enjoying his job as a dart player, which he loves dearly.

All the players told us very interesting stories about their first encounter with dart and how they became professional players. It was a great opportunity to see a side of the players that we didn’t know before, and we are looking forward to seeing more of them.

Which of these teams will win THE WORLD ONLINE LEAGUE?

THE WORLD ONLINE LEAGUE is available from Thu 24 February to Thu 28 April with three matches streamed every Thursday from 20:00 (JST).

Check out the official website for more information about the competition and the competitors.
https://intl.darts-theworld.com/en/

We hope that you enjoy watching the players in action!